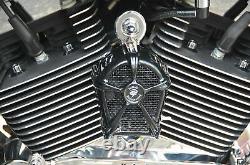 Our new model is lighter, faster, weather proof, and more compact than our previous models; while at the same time adding more style to the fan housing. Our redesigned and patented motors are smaller in size, but produce the same performance as our previous motors.

We were able to achieve this by micro-balancing the fan components and increasing the speed to 12,000 RPMs. The motors are so powerful that they can actually lift off the ground like a helicopter.

After the motor was re-engineered, we contracted with a major manufacture, which makes accessories for the Harley Davidson catalog, to produce a fan housing that fits our motor. This ensures that the housing meets Harley quality in form, fit, and function. We are so confident in our new design that we are offering a one year full replacement warrantee on our fan. Harleys are notorious for overheating in stop and go traffic.

This is especially true of Harley-Davidson's twin cam fuel injected models that are designed to shut down before the motor locks up. That is a nice safety feature, but who wants to be in the middle of the city or a bike rally when their bike shuts down.

What most people do not realize is that oil pressures drops almost to zero at idle when oil temperature gets over 250F degrees. Even before the bike shuts down you are having significant engine friction wear because of lack of oil flow. LeNale Engineering has a simple solution that fixes that problem - a compact stylish fan that fits all models, and is effective at keeping the motor cool in hot driving conditions.

Our fans are half the size of Harley's parade fan, but pump out a larger volume of air. Our motor design incorporates the latest technology high-velocity turbo fans used for cooling military mobile equipment in extreme heat, wet, and heavy vibration environments.

These fans are ten times more efficient than a conventional cooling fan of the same size and produce over 205 CFM of airflow at 140 MPH velocity. In engineering testing we found the optimum cooling CFM range for Harley motors is 185 CFM minimum and 225 CFM maximum.

Any fan operating outside of that range is not going to be effective. The LeNale fan does not draw high amperage so you can leave the fan running at idle without draining the battery. Every fan has a built in manual switch that is easily reachable from the driving position without bending over. Just turn the fan on when you get into stop and go driving conditions.

We do not recommend an automatic thermostat because the purpose of the fan is to keep the motor from overheating and not to reduce the temperature once it does overheat. Many police departments and government agencies now install LeNale Cooling fans as standard equipment.

These fans were also tested at the Salt Lake races. Although the fan looks great - it is the quality of the design and manufacturing that makes the difference.

Before you unwrap your parts double check your fitment and once unwrapped, look the item over before trying to install it. If you can snap a picture of the damage and notify us ASAP we can replace the order right away. Notify us right away so we start the process. We're happy to step in and get the ball rolling. An estimated restock date will be provided at the time of cancellation. The item "LeNale Engine Cooling Fan Black 14-16 FLH Touring Harley New Design" is in sale since Monday, May 18, 2015. This item is in the category "eBay Motors\Parts & Accessories\Motorcycle Parts\Engine Cooling\Fans & Fan Parts". The seller is "easternpc" and is located in Gambrills, Maryland.

This item can be shipped worldwide.